The idea of the International Swimming League appeared in 2017 by Ali Khan and the inaugural event run in December of 2019. While the time between conception of the concept and the first event run was relatively short, the groundswell for separation from FINA has been brewing for years. FINA's lacking of progressive & proactive actions with respect to the sport and it's evolution and being mired in allegations of corruption have fueled dissent for years. Also, the flagrant extortion of the athletes by FINA & similarly the IOC, who pull in $5.7 billion from sponsorship and television, as it did  in the 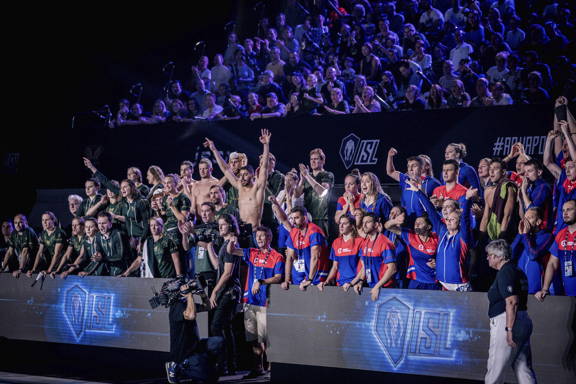 four-year cycle leading up to the Rio Games in 2016, swimmers and runners have complained of exploitation. While the IOC's accounts show that officials spend millions a year on travel expenses, many athletes struggle to finance their training and Olympic appearances, some resorting to selling their medals to stay in the sport.

FINA, clearly afraid of the ISL, did everything they could to shut down the League - from threatening sanctions & suspensions to lengthy court battles. Swimmers openly backed the International Swimming League, saying that it is more progressive towards the future of swimming. In response to the threat of sanctions and suspensions, athletes such as Chad le Clos and Adam Peaty and several other internationally recognized swimmers, sent a stark message to FINA: "ban us if you dare, we will be racing in the League."

What Makes The ISL Good?

It's exciting! It has a similar feel to the NCAA, with a few distinct differences:

It is a reinvention of the sport of swimming. It brings an evolution to the sport of swimming, pulling it into current times. It is a professional league that showcases the talent and ability of so many high ranking athletes. These athletes seldom have the opportunity to achieve the notoriety or benefit from the exposure that the ISL provides.

There are professional leagues for almost every other sport. The ISL provides the opportunity for the swimmers and swimming fans to benefit equally alongside the governing body.

The is no shortage of a whos who of names on the rosters from all over the world. The makeup of the teams include athletes that span several years of Olympic appearance. Check out the full roster here:https://a.isl.global/